Our present political environment scares the shit out of me. I started out my art with political pieces that reflected my anger and depression. Since then I moved away from the political, not because I'm no longer angry, but because I could no longer find inspiration from my anger. I may or may not go back to the political and may or may not find my muse there. The anger remains no matter.

Bush, Cheney, et al continue in their goal to create an Orwellian America. Those leopards won't change their spots, but I had hopes that McCain wasn't the same sort of leader. Alas I was wrong. "Meet the new boss, same as the old boss." I'm not so sure we won't get fooled again.

You may have seen this detail of my 2006 piece The Medusa Leaders or Orwell Just Got the Year Wrong in which I quote George Orwell, "In a time of universal deceit, telling the truth is a revolutionary act."

Sign me an agnostic who is praying for this world and country. 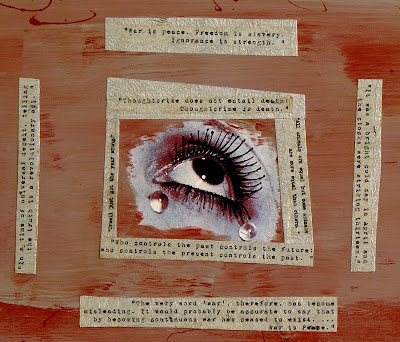