The day we've been waiting for! Here are a few ways to celebrate with friends in the Free Republic of Carrboro.

First at the wonderful Glasshalfull restaurant and wine bar at 106 S. Greensboro where lovely Karen and I will hang out for a while:

Hi! Glasshalfull would like to invite you to celebrate the inauguration of Barack Obama with us on Tuesday evening, January 20. Chef Ricky Moore will be grilling a custom-made "Barackwurst" served with all the trimmings and delicious GLF French fries. Some tasty vegetarian options will be available as well. In addition to all the choices on the wine list and the beer taps we'll feature a special cocktail to toast the new president and get the party rolling! The big screen TV will cover all the festivities in DC.

We hope that you can join us any time during regular restaurant hours beginning at five.

Roughly catty-corner to Glasshalfull at the Century Center, 100 S Greensboro, is the culmination of a four year art project by Hunter C. Levinsohn

"A Chronicle in Cranes, the Finale" has been a four year art project which began January 20, 2005. Each day an origami crane was made from the first fold of the first section of the New York Times. The project will end on January 20, 2009 along with George W. Bush’s second term in office.

You are invited to come to the Carrboro Century Center on Tuesday, January 20th from 6 to 8:30 pm, walk into and out of the last four years safely and learn to make an origami crane.

Lastly, down the steet at 204 W. Main is the Obama InaugurOation with live music. Hope to see everyone celebrating the rebirth of America! 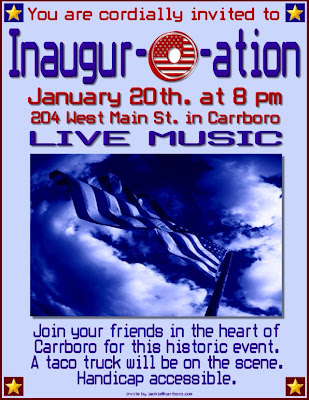