Clearly I haven't posted much on my art lately. I have been thinking about it a bunch but haven't picked up a brush recently -- except to paint the walls in the new Brooklyn apartment. Before I left NC I worked on a few 3D pieces using wood, gourds, and metal. Oh and the odd one made from a broken Rob Levin glass bowl. 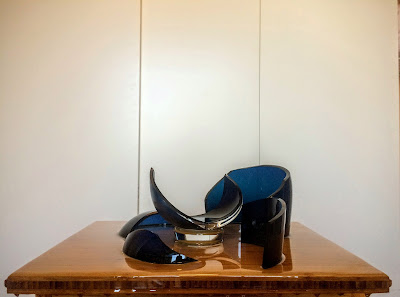 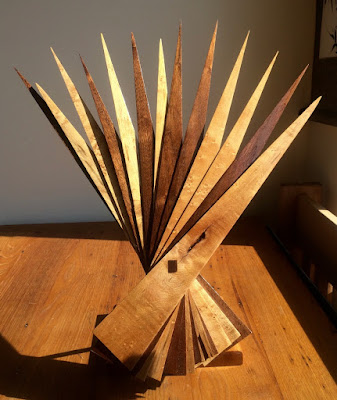 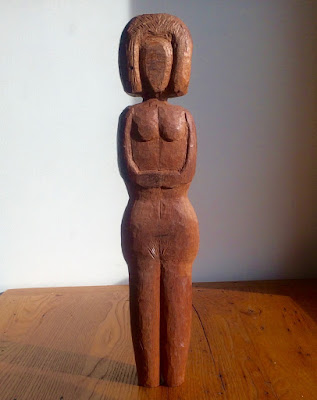 I recently created chrisbeacham.com that describes my work in arts-driven economic development including some interesting materials on some of the projects I've led.

It also includes various blog posts on topics of interest like the Met Breuer opening and a new report on my fascination with Martin Wong. 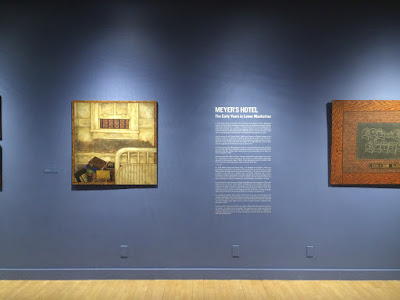 Check it out and let me know what you think.

The new Met Museum for Contemporary Arts: A review of the initial exhibit

The Metropolitan Museum of Art Breuer is open

I start here with the Unfinished exhibit and add something on the terrific Nasreen Mohamedi in a later post. So, Unfinished has gotten universally meh reviews. I've linked to some of the reviews at the end here, but basically for the critics it is a swing and a miss. Some say "a wild, swinging strikeout", others call it "a weak dribbler to first" while some admit that, while not pretty, "a broken bat single is still a hit." Heads up: I'm glass more than half full and I highly recommend a visit. The bad misses are more than made up for by wonderful and very fun doubles off the wall followed by a homer or two.

I loved it while still understanding the complaints. The curators stretch the concept, meander, throw some wild pitches, and generally play a bit sloppy. Mixed metaphors and rookie mistakes abound (sounds like this review). Still, it's mostly an ungainly rookie who'll make it in a couple of years. Think Nuke LaLoosh tied to the bed listening to Annie read Walt Whitman and then reaching the bigs later and winning a Cy or two.

I mean how can you hate seeing the amazing Alice Neel portrait you see top left? It's a great and melancholy story but James Hunter Black Draftee is a brilliant piece and really a perfect encapsulation of the conceit of the show. It basically answers the question "Is unfinished really a bad thing?" with a resounding "No!" Who decides anyway? In this case the US government, the draft, serendipity, and Alice did. Grand slam to right!
Without going into too much detail and analysis let's look at a few and see if they make a visit seem worth it:

The Rembrandt to the right reflects a beautiful casualness. Perfection is not the goal but emotion might be. The luminous knife and stunning facial richness makes this piece for me. Is it unfinished? Hard to tell. Triple off the wall for van Rijn!

How about this rad Lucien Freud? Double down the line scores two!

Kerry James Marshall rips a solid single up the middle.

Rauschenberg's creatively titled White Painting? Strikeout on a 3-2 pitch in the dirt with the bases loaded in the bottom of the ninth. Admittedly the shadow of the woman walking by and ignoring it does help.
Anyway, go see Unfinished with an open mind and a bag of Cracker Jacks.
Other artists featured: Pollock, Twombly, Marden, Mondrian, Newman, Johns, Lewitt, de Kooning, Picasso, Degas, Cezanne, Renoir, Van Gogh, Warhol, Titian, Turner, Bourgeois, Manet, Monet, Giacometti.
Other, more erudite and less obsessed with spring training reviews.
Hyperallergic: 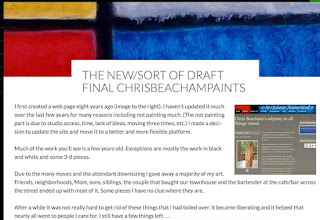 I've moved my old Sandvox based site over to Wordpress (Twenty Fourteen theme) and I like it. It took a while but I think it's cleaner and more attractive. Go to chrisbeachampaints.com and let me know what you think.

I've also established chrisbeacham.com as my personal site that I'm using to sell myself after moving to Brooklyn without a job. It's also Wordpress using the Portfolio theme Ditto on letting me know what you think. 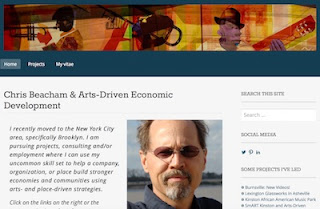 You never can tell

So Karen and I have given away most of our work because we had no place to keep it. It's gone to family, friends, workmates and acquaintances. This one I posted about in 2013 (see below). My older son liked it so he took it. But before he did he rotated it counterclockwise and made it into an abstract landscape (if that makes sense). Certainly is more interesting. If you own any of my paintings feel free to turn them any way you want! 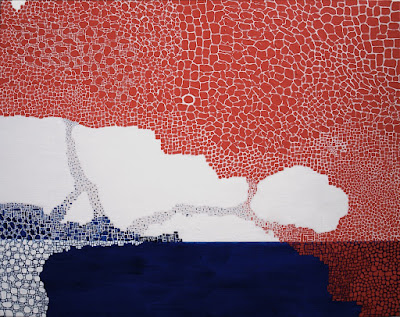