It's been awhile but I promise I've been working. I did finish my holiday card piece and I have a couple of things with potential. For now I'll post something I started this Thanksgiving holiday. It's not finished but I think I like it so far. 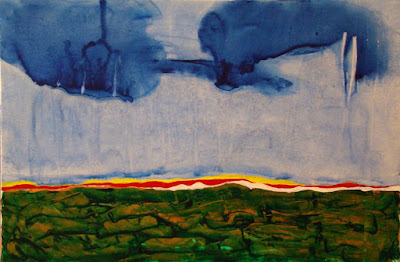 Wash away the detritus

I woke this morning nervous, edgy and still hopeful. All objective evidence points to repudiation of the last 8 years and an awakening to a better day.

On my way to work in a dark drizzle, I was struck by the reds, yellows and oranges of the fall maples and the contrast of the fallen leaves on the green carpet of the lawns. I noticed the rain washing away the dirt and grime and had this deep feeling that it represented a stripping of evil and hubris from the American soul.

I was born in Jackson, Mississippi and grew up in Baton Rouge, Louisiana. The Jackson newspaper, the Clarion-Ledger, has endorsed Barack Obama. Baton Rouge, I hope, will re-elect an African-American mayor. The times they are a changing.

I did not believe I would see the day when 68 million or so Americans would vote for a black man for president. And tonight I will watch with tears streaming down my face if the polls and the pundits are correct and we elect Senator Barack Obama the President of the United States.