The TimesOnline of London is having a contest to select the best visual artists of the 20th Century. They started with a list of 300 -- painters, sculptors, photographers and graffiti and video artists. So far more than a million people have voted.

Sadly there are problems. First the site sucks and the list is problematic. It's hard to see the second half of the list (starting about M). I was unable to vote for Lee Krasner no matter how many times I clicked on her name and half the time her name disappears from the list entirely. I know I voted for Morris Louis but he disappears too. Artists left out? How about Andrew Wyeth (no Wyeth's actually), Joan Mitchell, Winslow Homer, Annie Liebovitz, Romare Bearden? And I'm sorry but Jeff Koons, who's on the list, makes me retch.

Still it's fun and the list includes many I'm not familiar with (including links to their work that sometimes - sigh - work). Go vote! (Just not for Koons.) 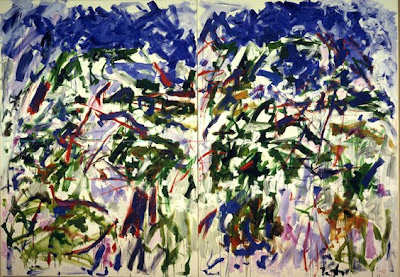 Joan Mitchell. Land, 1989 at the National Gallery of Art.