The Economic impact of artists in America

The National Endowment for the Arts released a report yesterday on the economic impact of artists. It counted all those folks it defines as artists -- actors, announcers, architects....photographers, producers, writers -- and found that "more Americans identify their primary occupation as artist than as lawyer, doctor, police officer or farm worker." That is nearly 2 million artists generating $70 billion in income. For a good summary see this NYT article and the full report at the NEA site

You can come by the show tomorrow night and add a few shekels to the $70 billion in income! I guess that means I'd have to report the income though......

The room works well for a public use space not designed for art. We have about the right number of pieces to fill it up without looking crowded. I'm hoping that everyone enjoys the show and the camaraderie. Here are a few photos. A couple of mine... 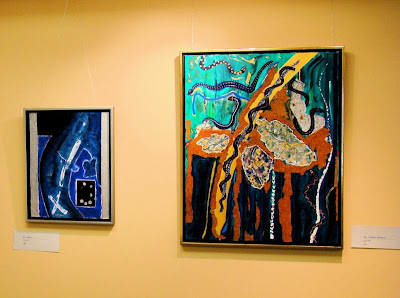 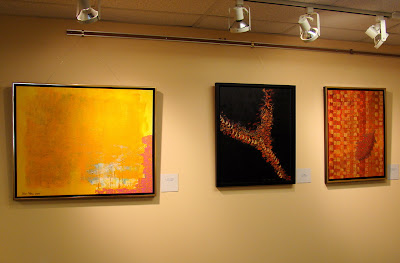 And finally I might have a few t-shirts that I make using black tees and bleach. Like this one... 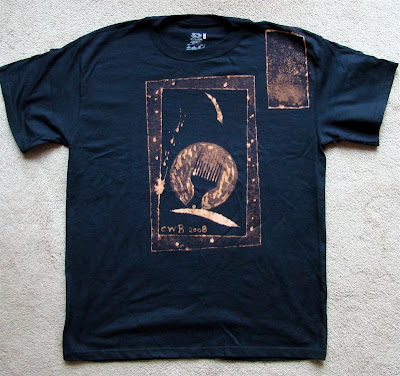 Image via WikipediaSuppose I was writing a blogpost about Jules Olitski. Would Zemanta find materials -- links, photos, reviews -- that were relevant to what I was writing? So I start typing.....

"Olitski was an abstract expressionist/color field painter. I recently saw some of his work at the Smithsonian Museum of American Art. He impressed me the most but I was also thrilled with Helen Frankenthaler, and Morris Louis (painting to the right) amongst others. Their juxtaposition with the AbEx crowd like Rothko, Hoffman and Motherwell worked well. I'm still amazed what the Color Field painters could do with thin coats of acrylics. Blah, blah, blah....."

I'm also pretty amazed at what this Zemanta was able to do! (For example adding the link to the official Olitski site.) On the other hand it didn't find any photos of Olitski's paintings nor the recent NYT article including his daughter Eve, but it did a remarkable job of following the gist of this post.

The show is now up

Karen and I hung the show this Saturday and I think it looks good. Come by this Friday 6-9 for ArtWalk if you can but the show is up through July.

Here's a new one of Karen's that is in the show. 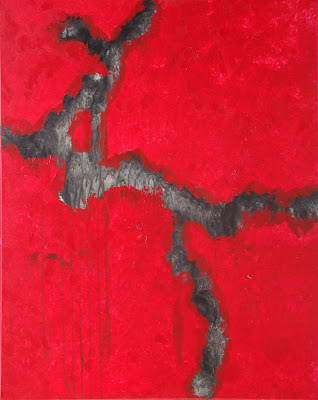 My pieces in the upcoming show

You can take a look at the pieces that (probably) will be in the upcoming show. I reserve the right to swap out a couple but most likely a subset of these 16 will be there. 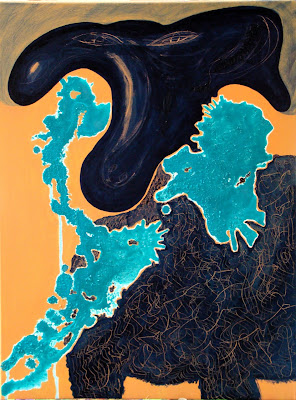 There are many reasons to vote for Barack Obama for president. Since this is a blog about art, I'll give you an art-related one.

Listen to Barack talk about the value and need for arts education in our schools.

I was born in Jackson, MS, while Jim Crow was still alive. My tiny mother was teaching at Provine High School the first year that the Federal government made Mississippi desegregate its schools. Grandfather, while not particularly racist for that place and time, thought that blacks and whites should stay separate and used the n-word liberally.

And last night I watched a stirring speech and an amazing moment. I didn't know if I would see such a day -- blacks and whites standing in ovation for a black presidential candidate. More than that I watched Hillary Clinton's multi-racial supporters cheering the first serious female candidate. I thought about a Democratic party race that included a black, a woman, and an Hispanic.

Compare this to John McCain, the last white guy, among many white guys, standing at the end of the Republican primaries. On this historic day, June 3, 2008, he was speaking in New Orleans. He spoke of change and responsibility.

On another historic day, August 29th, 2005, Hurricane Katrina plowed into New Orleans. The levees failed and as a result more than 1,800 people died.

McCain wasn't in New Orleans that day. He wasn't in Washington either. Instead he was with George Bush in Phoenix so that Bush could cut McCain's birthday cake at Pueblo El Mirage RV Resort and Country Club. Because they had nothing better to do. Because eating cake was the responsible thing to do.