Where art takes you

I nearly never know what my painting is going to ultimately look like when I start. I'll begin with some lines or colors or a vague idea and see where it takes me. This started as a planned mixed media collage piece. As I began to work with it I found I liked the colors and the relationships so much that I didn't want to cover them or spoil the basic simplicity of the piece. So it remains as you see it for now. 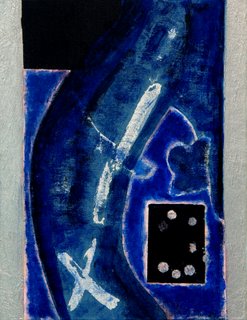